In August of 2013, I started a new job. A very interesting aspect of my job is the ability to create personal goals for yourself, announce them to your team, and have six months to work on them and then present them.

I wanted to challenge myself to learn something new and cutting-edge, but also have fun at the same time. So, I set out to learn meteor.js. What better way to learn a new technology or language, than to actually build something?

So, the idea came to me when I was sitting at my desk one night and I realized that in order to budget myself for the next month, I’d have to have a spreadsheet, a calendar, and a calculator at my disposal. This isn’t very efficient, I thought. So the idea to use my goal to write a personal budget app was born.

If you want to skip to the good stuff, it’s on my github.

I was amazed at how fast I could get it up and running. I installed meteor, ran a few commands, and started writing code as my app came alive on my screen in real time. Super neat!

What I ended up with was a clean list of my expenses and income, lined up in order of date, with a small “snapshot” section on the right side that told me in a single glance how I was doing, budget-wise. I can add new entries and edit them in a matter of clicks, and everything updates in real time. 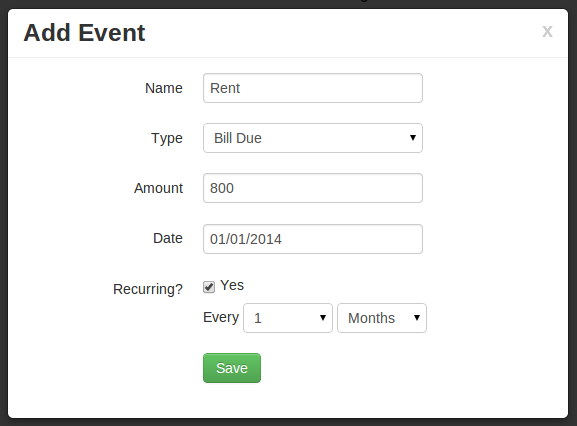 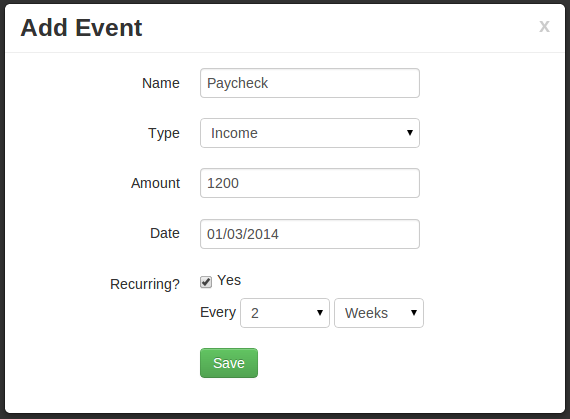 Once you’ve added the events, the app looks at the next 30 days and fills in the events according to the date and recurring basis (if any) that you’ve filled in. For example, today is January 12th, so after adding these two events, I see this:

Now, at a single glance, I can see how much I will have left after I pay rent 30 days from now, as well as a running total. This way, I can look for any negative, or low numbers, and budget accordingly.

Overall I’d say this app definitely has saved my butt a few times. Things are much easier to manage, and I can see any shortages a month in advance and plan for them, instead of updating a spreadsheet every week and not finding out how things are until that week.